naked boys singing! is pretty much what it sounds like, though perhaps more fun

naked boys singing! is pretty much what it sounds like, though perhaps more fun

Naked Boys Singing! is pretty upfront about what you might expect when you buy your tickets for the show. Though when the show originally opened in 1999 it was, perhaps, a bit more subversive. Today, as then, you have a gaggle of talented guys prancing and dancing about the stage singing a roster of entertaining songs. 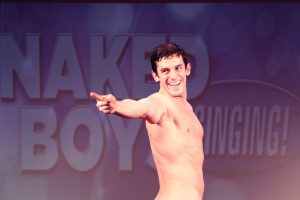 Updated to reflect the current climate, some of the lyrics have changed and other songs making reference to pop culture that has since been lost to time have been retired. Naked Boys Singing! still retains its charm notwithstanding these changes.

The demographics of the crowd certainly shifts from what the original run saw. Now you’re just as likely to see couples, hen nights, stag nights, and any random grouping of friends. The night I visited the theatre there was everyone from early-twenties to an octogenarian. I suppose this diversity in the audience is part of what the show intended to do in the beginning. What was once totally shocking and risque, is now a bit more mainstream. 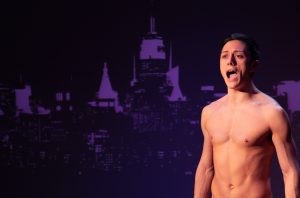 Naked Boys Singing! remains a fun show to experience on a Saturday night—and when better than this month to go see it? NYC is host to WorldPride 2019 as part of the commemoration for the 50th anniversary of the Stonewall Riots.

Take in this show and The Prom during your visit and celebrate Pride with Broadway, Off-Broadway, and a troupe of naked men. What could be better?