how malaysia stopped me from being such a scaredy-cat… sort of: langkawi is a destination worth overcoming fears for

how malaysia stopped me from being such a scaredy-cat… sort of: langkawi is a destination worth overcoming fears for 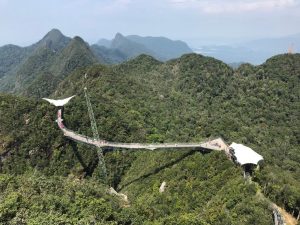 These words of attempted-reassurance come from my confident driver, who cuts through the ocean waves on his torpedo-like jet ski – which is probably going 40m/p/h but feels like 100, or at least – to the wimpy passenger behind him, knuckles milky-white from desperately clamping tight around the holding bars for dear life.  (That’s me, by the way…)

‘I am scared!’ I call back, not knowing whether or not my feeble cries even reach Ary, the captain of this vessel, or are, instead, carried away into the distance by the forceful winds, unheard forever.

I’ve been riding on the back of Ary’s jet ski for the last five minutes, surrounded by the grand seas, wondering if the next four hours of our island-hopping trek will involve me trapped in-between states of prayer and petrification, gripping on the back, teeth and buttocks clenched, filled with dread and terror. 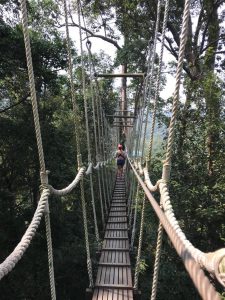 I was too afraid to drive the jet ski myself as I am – as is surely clear by now – a big wuss. I figured being driven by a pro on our tour would make it less scary for me as we explored the island of Langkawi, an archipelago of 99 islands off the mainland coast of northwestern Malaysia. Alas, that plan didn’t seem to be working out.

But then… things changed. As we approached our first stop, to gaze at just a few of the 99 paradise lands in the Andaman Sea, I slowly, but surely, began to calm down, just like Taylor Swift instructs one needs to. I don’t know if it was the big leafy rocks of land, that felt like we were approaching Jurassic Park. Or the fact that my eyes were, at long last, properly open now – and the soothing teal tones of the skies were beginning to take effect on my formerly hummingbird-esque heartbeat. Or maybe Ary’s reassurance had become more of an instruction. Don’t. be. Scared. 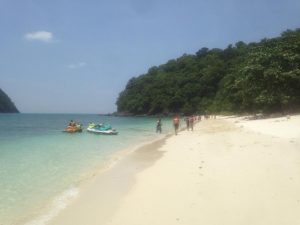 Had it worked? Apparently so. I’d gone from giving Hitchcock-esque reactions to being an open-mouthed and thrilled tourist in just ten minutes. Which is why I chose to begin my account of Malaysia’s jewel, as it’s known to many, with, what initially was, the hardest part of my adventure on the island, rather than kicking off with the usual wanderlust-fuelled, romanticized introduction.

See, the sheer beauty of the place managed to be impactful enough to distract me from the fear I had of falling off of this jet ski, likely never be found again, unless, that is, my shark-chewed carcass washed up onto shore in the coming weeks (sharks aren’t really an issue in Langkawi, but you see what I mean… jellyfish are though!) And that is, perhaps, the greatest demonstration of the region’s power I witnessed on the trip – because anything that can successfully shut me up is surely worth anyone seeing, in my book! 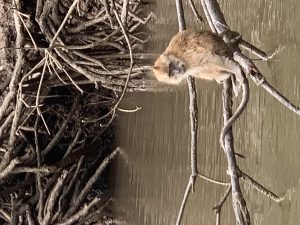 Once I’d settled, I was able to appreciate the many treats on our adventure, which can be booked here at www.megawatersports.com. Ary – our patient Malaysia guide – who did take safety super seriously, it has to be said, showed us Pregnant Maiden Lake, a freshwater lake on a mum-to-be shaped island, that is believed by locals to help you fall pregnant (another fear of mine, which thankfully didn’t happen!) that you can swim in, surrounded by a giant fence of glorious nature on Dayang Bunting, the second largest island in Langkawi after, yes, you guessed it… Langkawi, with monkeys swinging in the trees and birds of every color of the rainbow darting above, providing you with chirpy background music for your strolls and dips, handily. 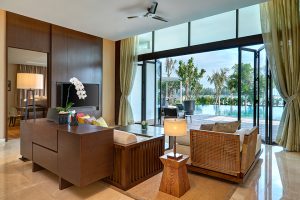 We stopped on one of many isolated beaches, that in Thailand would be swarmed with tourists and locals trying to put Slow Loris’ on their shoulders in exchange for money, but that we were able to enjoy greedily, smug in the knowledge we were ahead of the curve (although, with three million tourists a year, and growing, it might only be a matter of time before Langkawi is just as invaded, so act fast!)

The adventure was rich with enough orgasmic views that choosing your ten best pictures to annoy friends with would be a real test in your whittling down abilities. By the time we got back, Ary was spinning the jet ski around in circles at full speed, approaching the shore, and my death grip had loosened, as I wasn’t scared. I’d even ridden one for a bit on my own, to my own amazement. 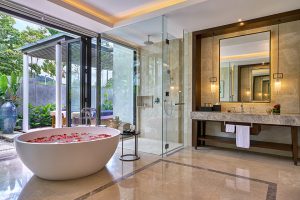 However, despite the fact I’d ended that excursion no longer jet-ski-phobic, I still decided I had earned relaxation time regardless. Fortunately, we were staying at the Danna Hotel, which now holds the title of Nicest Hotel I’ve Ever Stayed In. And, bear in mind, I’ve stayed in more than FOUR Premier Inns (!)

Seriously though, The Danna boasts the top tier of luxury and world-class service – the latter of which has seen them rated first in Malaysia and in the top 25 in all of Asia, according to Traveller’s Choice, which is quite the accolade in a continent already known for luxury service.

And so, to test this out, I shook off my near-death experience (writers are allowed to exaggerate, OK?) with a massage in their spa, which continued the hotel’s reign of personal accolades from me, to add to their official ones, as it was my Best Ever Massage too. 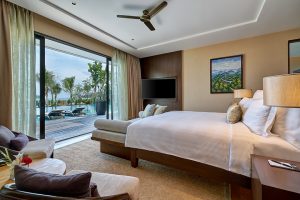 Decadent rooms with the views that make pulling back your curtains a euphoric rush, every time, and a shimmering pool-side lounge area mean the only negative element about the Danna is that it makes you want to stay there and not see the rest of Langkawi! Especially in the villa, that we were lucky enough to spend a night of indulgence in, which, in all honesty, like there’d been a mix-up and we’d been given Kim Kardashian’s holiday by mistake. Hollywood havens in Malaysian hotels, indeed.

And you’re treated like an A-Lister too. The Danna prides itself on having unrivaled service. The manager told us, ‘We hire people not based on their qualifications, but from their behaviors.’ A sunny disposition makes you more desirable to this hotel than Degrees in hospitality, it seemed, and it showed. You’re smiled at so much, you do begin to feel famous. I was putting my sunglasses on with unwarranted confidence by the last day!

Despite my prayers on the jet ski earlier, I am not religious, it has to be said. However, the lamb curry in the Planters restaurant almost made me believe in God. That’s just one of many incredible restaurants in the Danna, which also boasts The Terrace – an Italian eatery, with a signature Tiramisu that could convert even the most adamant anti- Tiramisu diner – tiffin lunches available at Straits & Co and The Verandah, which holds claim to the largest gin collection in Malaysia. And once you’ve tried too one too many – hic! – there’s a fantastic games room upstairs, where you can enjoy cocktails and billiards into the early hours, or for families during the day.

You might need a stiff gin cocktail before going on the Umgawa zipwire experience, which is another popular attraction, which allows you to experience some truly out of this world visual feasts from the air. Scary, yes, but the views again make up for it. And if you can’t make it up the wire, the 7 Wells waterfall in the complex can be seen on foot and is simply stunning.

There are two boat tours you could, and should, partake in, which offer something different from the jet ski adventure. On the Sunset boat tour – www.avante-holidays.com – you take a lazy and indulgent coast around the islands, with the chance to jump off and go for a swim in bath-like salty seas, with a cocktail bar at your disposal, which makes a great introduction to Malaysia, as you sleep off your jet lag. And the other, a true highlight of any trip, and not to be bypassed, is the amazing Mangrove tour: www.langkawi-nature.com. 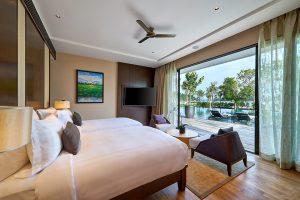 On the mangrove tour, you get up, close and personal with the wildlife on the islands. The brown monkeys – hundreds of them! – are playing on branches, and coming up to you as you sail past, with their families, cradling their super-cute babies, and providing a never-ending show for anyone nearby. Sometimes, they’re very close. One cheeky monkey jumped on our boat looking for food, which was quite alarming (again, yes, I’m a wuss!) But left without issue. Soon after, a dolphin came to say hello, and we also saw giant lizards, vipers, and were even taken through a bat cave, as well as being shown the island’s iconic eagles. Unfortunately, many tourists have fed these animals, which has caused untold damage to their eco-systems, but all the tours we experienced were ethical and strict about this matter. Getting to see the brown monkeys and other animals in their natural habitat felt like a real honor – the Mangrove tour is really special, and informative, too.

For a more entertainment-based day out, head to Oriental Village, home to the world’s steepest cable car ride, which is a staggering 400ft high, giving perhaps the best views of all in Langkawi, which is saying something. For those not fond of heights, there are a number of other attractions on the fun-filled day, including a 3-Dimensional art museum – camera needed! – known as Art in Paradise, all found at the complex here: www.panoramalangkawi.com, which is sponsored by Langkawi Development Agency (LADA), Www.lada.gov.my. 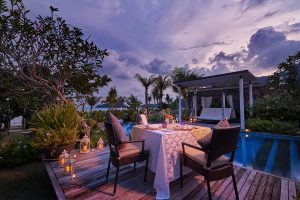 The Malaysian food is delicious, the people are warm and welcoming and they have more than enough beauty to make Thailand nervous, especially with easy and reasonably priced flights available through Www.malaysiaairlines.com.

About the Author: Edward M. Dyson

Ed Dyson is a journalist, author, and comedy writer, living in London.