camp morning wood: campy fun in all the ways

camp morning wood: campy fun in all the ways

Camp Morning Wood opened tonight at Playwrights Horizons, just a couple of doors down from Theatre Row, home of Naked Boys Singing! which is fairly apt. Though it’s a musical that promotes a gratuitous level of nudity, rather than the vaudeville-esque style of its neighbor, Camp Morning Wood has an actual plot. 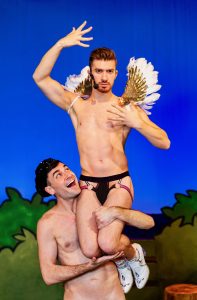 Set in the present day, and roughly a few dozen miles from the present location, Camp Morning Wood follows Randy (Alex Gagné) and Gabe (Tim Garnham) from their NYC-life to the Hudson Valley to try to get away from it all—especially their phones—and rekindle their relationship.

The hilarity ensues when things go wrong, as is the general expectation for the device. Reminiscent, well more than, of the opening sequence to Rocky Horror, the duo ends up in a gay naturist campground.

Filled with relatable references for any gay (from bear to otter to gym bunny to twink and twunk and virtually all of the rest of the gamut), Camp Morning Wood delivers through its book and lyrics, by Jay Falzone. 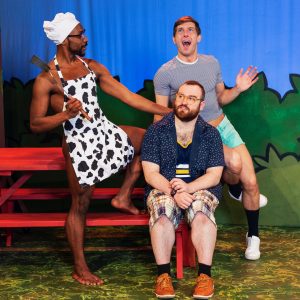 Brady Vigness, making his NYC debut by way of Nebraska, Ohio, and Nantucket, acts as the emcee as Jacques. Forgetting his accent for a brief moment, we get a fun Poughkeepsie reference. Jacques’ performance is superb and alongside Randy and Gabe keep things moving.

Though Alex was more reluctant to embrace the naturist camp’s ethos, he had all the zealousness of a convert at the right time. As a Professor of Colonial Queer Studies (it’s a thing), he saves the day along with another Ph.D. camper (Public Policy). The plot gets perhaps a bit outlandish, but it never fails to entertain.

Camp Morning Wood is unafraid to make fun of itself, theatre in general, and pretty much anything else–but it does it in good fun, and it makes a point (more than just earning laughs and applause).

Well timed for WorldPride, Camp Morning Wood is running for a limited engagement. Certainly worth checking out while you have the opportunity.