what the constitution means to me: a political play that almost speaks for itself

what the constitution means to me: a political play that almost speaks for itself

Heidi Schreck’s incredible play What the Constitution Means to Me at the Helen Hayes Theatre manages to be both timely and feel like it will remain evergreen.

With a well-written script that manages to keep you on your toes—wondering is this a play or a conversation, theatre or real—What the Constitution Means to Me will assuredly have a long shelf life off-Broadway in regional and scholastic productions as it doesn’t require much in terms of big budget scenic design. The key ingredients are simply the talented actors that bring Schreck’s script to life.

It’s fitting that it’s somewhat autobiographical and stars its creator, but the concepts discussed are larger than any one person or cast and will easily translate elsewhere. 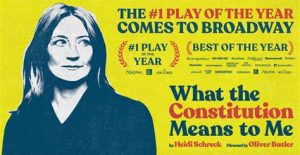 What the Constitution Means to Me manages to take miscellaneous legal precepts and weave them into a narrative that fosters real discussion regarding the legal apparatus that underpins our country.

The popular acclaim and awards this play have received are well earned. Oliver Butler, director, brought Heidi’s vision to life in a way that likely exceeded what she imagined.

Mike Iveson provides a necessary counterbalance to Heidi’s role and his monologue towards the end of the production offers a resonant performance that, like Heidi’s, leaves you wondering where the balance between acting and being ends up.

One exceptional feature of What the Constitution Means to Me is the incorporation of a young performer discussing the history of the constitution, what it means in our day-to-day lives, and the political moment in which we live. Strictly speaking, this isn’t a necessary device or plot element, but it rounds out the show to become something more. Without, What the Constitution Means to Me would remain successful; with, the play is more impactful.

The producers partnered with the ACLU to give audience members a pocket copy of the Constitution to take home. I hope this serves as a tangible reminder to people to get involved. The moment we inhabit is ripe for political action—if only more of the everyman would get involved.