the prom: broadway’s saccharine yet entertaining coming out

the prom: broadway’s saccharine yet entertaining coming out

The Prom may be a little cheesy and a little overly saccharine, but it entertains at a level that successfully pulls together a Golden Age musical and contemporary meta camp. Heavily reliant on casting to make everything work, Beth Leavel (playing Dee Dee Allen) and Brooks Ashmanskas (bringing Barry Glickman to life) anchor The Prom. Caitlin Kinnunen plays an earnest Emma–quite convincingly–who adds much depth to an otherwise dearth of nuance.

The framework of the musical is lacking, which leaves the cast to the difficult work of selling it to the crowd. They’ve managed to do it night after night, leaving the audience with smiles and full hearts. That’s a bit of a disappointment when you consider the all-star creative team behind The Prom, but it’s partly down to the subject matter. 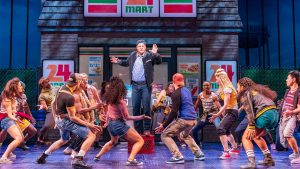 A coming out meets coming of age story is rather tired at this point. That said, seeing inclusivity of any kind is always welcome. But the queer vs. small-town Christian is a trope we’ve all seen ad nauseam by this point. I am thankful that Emma is the character with the most depth rather than just a stereotype–though the costuming for her (Ann Roth and Matthew Pachtman) does its best to scuttle that idea. Emma’s musical numbers are a tour de force, and Christopher Sieber’s (Trent Oliver) has an especially triumphant moment with “Love Thy Neighbor.”

That said, costume choices for the rest of the cast work much, much better. Brooks Ashmanskas’ Barry Glickman, for example, is costumed in a way that you can tell his character is confident and in-your-face, even if the Twitterati might take offense to his lusciously over-the-top campiness.

The Prom is brimming with theatre in-jokes in a way that will make even the most jaded New Yorker laugh knowingly. The worry is that they may not translate as well to the heartland and theatergoers who may only see a few Broadway productions in their lives. That said, there’s enough here that even if they fall a bit short of the target, everyone is sure to be delighted by The Prom.

Perhaps one of the most poignant moments is found in an unlikely place. Ashmanskas’ Barry Glickman had been forced to miss his own prom, and he finds a bit of closure in being able to attend this new prom with Emma. Though, perhaps a bottle of Dom is a bit over the top, even for this show.

The dichotomy between the approach of the Broadway meddlers and the approach Emma chooses to use underlines the difference between how celebrities try to use their influence and that of the much-maligned influencer when Emma elects to skip a talk show appearance for a from the heart internet video. Predictably, the video goes viral and wins over more people than efforts of Dee Dee, Barry, and crew. 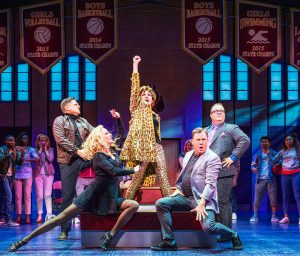 In the end, the efforts of Courtenay Collins (Mrs. Greene) to keep the prom as straight as the stick up her backside fail after being damaging to the community and especially hurtful to Emma and her own daughter. I would have liked to see her given a bit more humanity and maybe even a first name, but she plays the part very well.

The creatives bring together the Ensemble in a way that makes it feel simultaneously intimate and like a big, in your face musical. Unlike Angie, who has been stuck in Chicago’s chorus for 2o years, you can expect to see more than a few ensemble members in bigger roles in the near future–they bring tons of energy and talent to the Longacre’s stage.