the phantom haunts more than 13,000 performances and shows no signs of fading into the night

the phantom haunts more than 13,000 performances and shows no signs of fading into the night

Andrew Lloyd Webber’s iconic The Phantom of the Opera won ten Tonys in 1988 when it opened. Now, more than 30 years and 13,000 performances later, Phantom shows few, if any, signs of slowing down. The Majestic theatre continues to live up to its name, and the design continues to wow with its lavish costumes, soaring music, and dazzling pyrotechnics. Perhaps it’s so long-running and highly-grossing in an effort to recoup the expense of the fantastical design–seemingly limited only by the room in the wings, flies, and stage the set and costumes seemingly defy any attempt to stick to a budget. 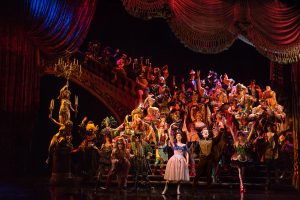 Set in a 19th-century Parisian opera house, Phantom takes us on a journey of gothic horror, mystery, and romance in a delightfully operatic musical.

Ben Crawford’s take on the titular character is nuanced and authentic to the historical parameters of the part. Unlike some other long-running productions, Phantom escapes the nearly inevitable decay. Crawford works tirelessly to keep his role as elevated as the perfect set and highly functioning cast.

Though he must have some secret to remain as energized as he does while dashes about the catwalk above to the pit below, causing mayhem in his wake whenever he feels Christine isn’t given her due. 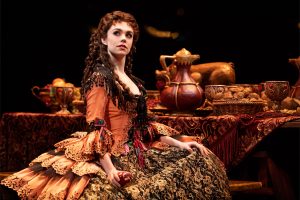 Kaley Ann Voorhees (Christine Daaé) is cast again in the same part where she made her Broadway debut. She was well cast then and remains so today. Playing off of Crawford, Voorhees keeps Christine as youthful, alive, and talented as she was when she first appeared some thirty years ago.

Jay Armstrong Johnson (Raoul, Vicomte de Chagny) brings a stunning voice to Phantom. You almost wish he had been around to originate the character a few decades ago–but don’t since you’d miss the opportunity to enjoy him in other contemporary parts. 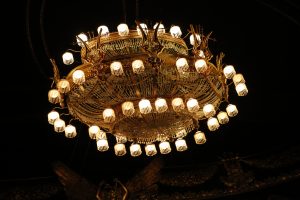 Perhaps the most surprising thing, aside from the percentage of tickets sold, is how well kept all of the set and costumes are. For a show that has been running this long, it would be entirely reasonable for a bit of wear to show around the edges. However, Phantom delivers consistently–making it a little easier to understand how it might still be plugging away all these years later.

Though written off by many New Yorkers as just another entry on the tourist attraction roster, The Phantom of the Opera is as good a show as one would expect in a Broadway theatre. And though the theatre may be full of groups on school trips, the Majestic does well coping with the traffic maintaining the experience you come to expect of any Broadway show.