After her production of Dave Malloy’s “Natasha, Pierre, and the Great Comet of 1812,” Rachel Chavkin had a lot to live up to. In that production, she rebuilt the Imperial Theatre and staged an immersive, genre-defying, period-blurring electronic pop opera adaptation of Tolstoy. This time, with the help of writer-composer Anais Mitchell, she adapts the story of Orpheus and Eurydice as a folk opera that offers a modern critique of capitalism. Chavkin has a talent for taking classic stories and giving them genius modern twists that make them speak to us in entirely new ways.

Though “Great Comet” was magnificent, it is here in “Hadestown” that Chavkin has reached her apotheosis. Practically every single thing about “Hadestown” is perfect. It plays with form in new ways, forcing us to question what we know and believe about the genre. Its design is breath-taking, its performances masterful, and its direction superb. Everything about this masterpiece of a musical has Rachel Chavkin written all over it, which is the main reason why it is so effective.

Chavkin has a very clear style that draws on ensemble work, evocative symbols, beloved stories, unexpected visual choices, purposeful anachronisms, and an open engagement with the process of storytelling. “Hadestown” has all of the Chavkin trademarks that we have grown to expect and love, but it also has some surprising permutations and variations. It seems that she has honed her craft and found a show that is hers to mold and master —and in doing so she has created a god among musicals. 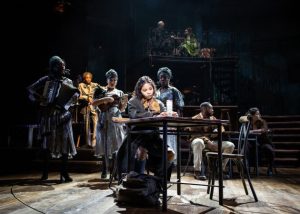 “Hadestown,” tells the familiar story of lovers Orpheus and Eurydice, their experience in the underworld, and their fraught journey back to earth. Although the plot is quite familiar — and has been told over and over again on the stage — everything about this musical feels new. “Hadestown” will make you believe you are hearing the story of Orpheus and Eurydice for the first time, and you won’t be able to take your eyes off it.

The musical is narrated by Hermes, played with expert wit and majesty by Andre de Shields. He introduces us to Eva Noblezada as Eurydice, a feisty, passionate, and young woman hungry both for love and for some food to fill her hungry belly. She is not the waif of mythology, nor is her Orpheus — played with youthful naivety by the enchanting Reeve Carney — merely a studly lyre-player. Persephone, played by Amber Gray in what is likely to be one of the most legendary musical performances of the decade, is bitter, growly, and rowdy. Patrick Page’s Hades, on the other hand, is a deep-bass, slow-walking, sexually predatory, double-breasted pinstripe suit-wearing millionaire supervillain.

This is not the Greek mythology you learned about in school. Here, Chavkin and Mitchell have re-imagined the story as a labor strife: Hades, king of Hadestown, is an industrial boss and a factory owner who treats his employees like slaves. For the six months he forces Persephone to live with him in the underworld, the Earth is cold, and its people are desperate. Orpheus is too focused on writing his song of spring to notice Eurydice starving. All of a sudden the plot of a myth has been wrenched into the realities of capitalism, industrialization, and poverty. 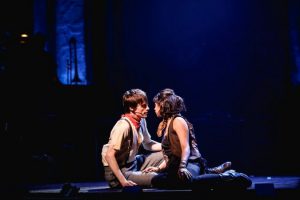 The design plays a major role in crafting this new world where myth meets the material conditions of modernity. In addition to Michael Krass’s modern costumes full of overcoats and overalls, Bradley King’s industrial lighting fixtures, which are manipulated by the ensemble in beautiful ways, help craft a clear world for this musical. Rachel Hauck’s set is a mostly empty, vaguely vintage, wooden semicircle, with a turn-table that Chavkin uses in creative new ways.

Although I have tried to refrain from making endless connections and comparison between “Great Comet” and “Hadestown” (similar style, similar musical vocabulary, some similar songs, and of course, they both have Amber Gray), the set evokes the unignorable difference between this and “Great Comet.” It certainly seems that this piece wants an immersive staging, and the semi-circle set and onstage orchestra certainly try to create a similar vibe to Chavkin’s previous work.

The orchestrations and arrangements by Michael Chorney and Todd Sickafoose are nothing short of a triumph. The onstage orchestra includes a frequently soloing trombone, an upright piano, two accordions, and some haunting strings that combine to make a unique mix of jazz and folk that lurks between celebratory and tragic. A trio of women, the Fates (Jewelle Blackman, Yvette Gonzalez-Nacer, and Kay Trinidad), have delicious and terrifying harmonies that make you wish there were awards for vocal arrangements.

I must, at this point, mention the political elephant in the room: the Act I finale “Why We Build the Wall” (which surprisingly pre-dates Trump). The parallels between Trump and Hades are not subtle, but it is in this song that Hades spreads his message of elitism and xenophobia. However, the song is rather confusing: if Hadestown is the underworld, where people go when they are dead, and once there they become laboring slaves, why does Hades need to build a wall to keep people out? Seemingly no one wants to be there and in fact, the people there all want to leave. Is the wall to keep the poor people of Earth out or the enslaves peoples of Hadestown in? “Why We Build a Wall” confuses the metaphors of the piece and although it is a terrifying song, it just doesn’t work within the logic of the musical. 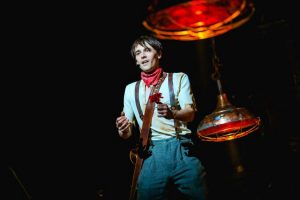 The musical may have one confusing song at its center, but it does not matter, because basically everything that surrounds the mixed metaphor of a wall is musical perfection. Carney’s tragic performance, Chavkin’s inventive staging, and David Neumann’s haunting choreography in “Wait For Me” combine to create perhaps the most visually stunning song ever to be seen on Broadway. Amber Gray’s Act II opener, “Our Lady of the Underground,” is a Tony-award worthy piece of theater that encapsulates everything divine about her performance as Persephone.

The actors are incredible, the design and orchestrations impeccably shape the world of the piece, and the direction is sublime. “Hadestown” ends with a song about how although everyone knows the tragic story ending of Orpheus and Eurydice, each time we hear it we hope it will end differently; it is quite fitting for a musical about storytelling to end with a song about how and why we tell stories. For the greater good of Broadway and musical theater, I hope Rachel Chavkin keeps telling stories. We need more directors like her and more musicals like “Hadestown.”

With “Hadestown” Rachel Chavkin has proven that she is one of the best directors in the history of musical theater, completely re-imagining the form and pushing it new heights. All we can do is bow before her majesty, see “Hadestown” over and over, and eagerly await her next work of art.

About the Author: Christian Lewis

Christian founded queer voices in 2015. Since then he's become a respected theatre critic in New York and a member of the Outer Critics Circle. He can be found running from theatre to class and back while he works on his Ph.D. at CUNY.