review: “be more chill” and the influence of the internet

review: “be more chill” and the influence of the internet

“Be More Chill” is perhaps the first show to make it to Broadway by popular demand. The show has had a massive teenage fanbase ever since its opening at Two River Theater in New Jersey back in 2015. After the Joe Iconis hit closed its off-Broadway production last summer, the massive young fanbase took to the internet and demanded the musical be on Broadway. Somehow, through the power and influence of the internet, it happened: “Be More Chill” made it all the way to Lyceum Theatre.

The musical, a modern-day Faust story, focuses on Jeremy (Will Roland), a loner, his friend Michael (George Salazar), a stoner, and his crush Christine (Stephanie Hsu). Jeremy is tragically unpopular but purchases and ingests a SQUIP — a pill with a computer in it that talks to you and makes you cool, or in the parlance of the piece, “be more chill.” Of course, Jeremy gets popular, but things go terribly wrong: people get hurt (literally and emotionally), and the SQUIP tries to take over the world.

In many ways, the plot of “Be More Chill” is nothing new. It’s “Little Shop of Horrors” meets “Dear Evan Hansen.” It’s yet another musical about an “outsider” high school boy with a crush. Despite this seeming blandness, something about this iteration of overdone tropes speaks to high schoolers. 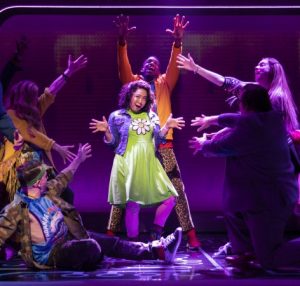 Perhaps it is the meanness of the popular kids, the nerdy-ness of the theater kids, or the overall desperation to belong. The show is most relevant and nuanced with Salazar’s character, especially his beloved Act II ballad, “Michael in the Bathroom” which is not only catchy and wonderfully performed, but is a spot-on depiction of social anxiety.

But for the rest, almost nothing about “Be More Chill” feels new. In fact, for a science fiction musical, there is very little about it that feels up-to-date in terms of technology. Yes, there is a hilarious and fierce “Smartphone Hour” (a play on “The Telephone Hour” of “Bye Bye Birdie” and maybe even “Cellular Fusion” in “High School Musical”), but even in this number, led by gossip and belting queen Tiffany Mann, all the characters talk on the phone — something people under the age of 30 almost never do.

“Be More Chill” claims to be a very modern story about popularity and belonging, but it barely mentions social media and doesn’t even reference Instagram. Unlike “Dear Evan Hansen” and “Mean Girls,” the other recent high school shows, “Be More Chill” does not understand or explore the massive influence that social media has on youth culture and popularity. For a show that is made possible by social media popularity, it is ironically out of touch. 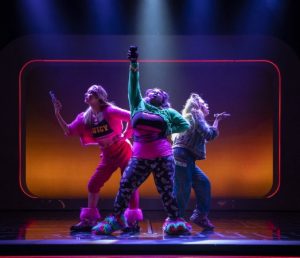 The cast all do a perfectly fine job. Roland, Salazar, and Hsu lead the show but are trapped by their under-written characters. In supporting roles, Katlyn Carlson as Chloe and Lauren Marcus as Brooke give the most layered performances as the insecure and jealous popular girls.

As director, Stephen Brackett usually leans into the comedy which is overall successful, aided by choreographer by Chase Brock. The design is mostly unimpressive: Beowulf Boritt’s set is a boring slew of moving columns, and Bobby Frederick Tilley II’s costumes imply that he has not set foot in a high school anytime recently.

There is nothing about “Be More Chill” that is bad, per se, but there is nothing about it that is particularly good, and in a season with “Hadestown” and “Oklahoma!” this isn’t good enough. Everything about “Be More Chill” feels very run of the mill: basic high school heterosexual romance, tired sci-fi Faust plot, and all the expected songs. That being said, the songs are always distinct, memorable, and (frustratingly) catchy. Joe Iconis knows how to make a musical that people will love. In fact, his young fans like it so much they used the internet to help get it Broadway — whether or not adults will like it, however, that’s a whole other story.

About the Author: Christian Lewis

Christian founded queer voices in 2015. Since then he's become a respected theatre critic in New York and a member of the Outer Critics Circle. He can be found running from theatre to class and back while he works on his Ph.D. at CUNY.