hillary and clinton: both, but not as lively

hillary and clinton: both, but not as lively

There was much anticipation as I awaited Laurie Metcalf and John Lithgow’s performance in Lucas Hnath’s Hillary and Clinton. With as much fantastic material to work from as they had available to them, it was sure to be a poignant, illuminating play, right? 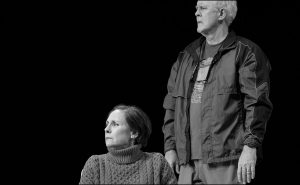 Laurie Metcalf (Hillary) packs a tremendous amount of talent into one body–which is a striking similarity to the real-life version of her character. Metcalf enters the stage and immediately starts with a monologue about the universe and how the one we are watching is slightly different than the one in which we inhabit.

It’s a device that almost works. If only Hnath had them take it a little further. To explore what could have been, rather than just to allow himself to guess at the dialogue and happenings over a couple of days in the 2008 Presidential Primary campaign waged by the original Hillary.

John Lithgow (Clinton) enters the scene with less energy and gravitas than Bill must have. Lithgow is a consummate performer and brings talents that were not tapped by Director Joe Mantello.

I suppose it would be nigh impossible to make this play an absolute hit, especially with Hnath’s perhaps overly cautious admonition of caricature that keeps Lithgow and Metcalf from channeling those they are portraying with more accuracy. Keeping it from becoming a comedy sketch befitting Saturday Night Live is a worthy goal, but by skirting it with such a large margin, Hnath severely wounded the play. 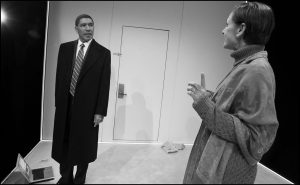 Just like the wasted talent of Hillary in this universe, it’s maddening that the fantastic actors are stymied by such a short-sighted script. With an imaginative opening with multiple universes, it had such an opportunity to entertain, educate, and elucidate what could have been. Though, it’s better to discuss what he did put on stage rather than what he could have, right?

What Hanth does well in Hillary and Clinton, is look at their marriage. Through this small window in time, we are given intimate access to their relationship. In both how it differs from those in which most of us inhabit, and how it is very human.

He doesn’t use his artistic license to push too far; instead, we are given a seemingly realistic portrayal of this marriage. Hillary and Bill are both candid, and Hillary shows a range of emotion most would say isn’t quite so apparent.

There is, perhaps, one real teachable moment in this play–in Hillary’s recounting her emotions and how they are invalidated by public perception. We are reminded that she is the arbiter of her own feelings–we don’t own that role. Perhaps, we could all do better to remember that and to carry that with us when we encounter others in the public sphere.

Leaving the theatre, you’re reminded of the Trumpian world in which we inhabit–if only we could have escaped it for the hour-and-a-half duration of Hillary and Clinton.