does the world need more or less mom and dad hugs?

does the world need more or less mom and dad hugs? 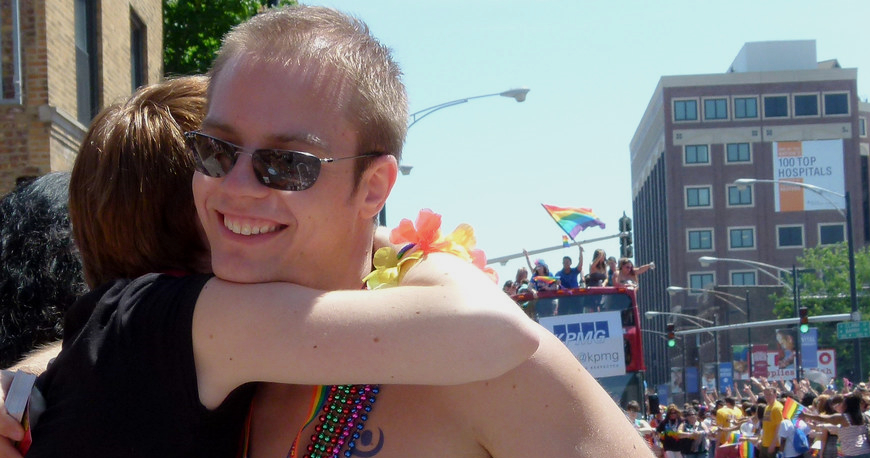 When I was a self-professed ally, I was not as good an ally as I thought I was. When my child came out to me back in 2012, everything changed. My child, Dave, was trembling and scared. All I knew to do when Dave came out was to hold my baby and give reassuring hugs. We still hug. I take it for granted. Should I?

Recently a friend invited me to a dinner party. At the dinner party was a gay couple. At some point in the evening, I went outside for a cigarette, and one of the husbands and a friend of mine went outside as well. We were talking a bit, and my friend asked me, “How’s everything going with Dave’s new boyfriend?” I smiled and laughed a little in my reply, “Oh my God, they are doing great. It’s been so long since I’ve seen Dave this happy.”

The husband outside with us was about my age. He asked me how long my child has been out. We started talking and the conversation got really deep about family and closets. A few beers later, we were outside again. He was telling me about his blue-collar family and I was talking about how homophobic I was in the ’80s.

Then he said the thing I have heard a few times. “You’re an amazing dad.” For the first time, I told the truth.

“Thank you,” I replied, “but if I’m being honest, that makes me uncomfortable. I make mistakes. I don’t think I deserve a medal for not being a dick to my kid. Loving your children is the bare minimum of parenting.”

“Today, there are more dads like you, but not enough. When you and I were in high school, a dad that could accept us was almost unheard of. Loving your kid might be the minimum, but not enough parents do it. That’s going to make a difference to your kid.”

As the party was winding down, he gave me a hug. He whispered into my ear, “Thanks for the dad hug!” 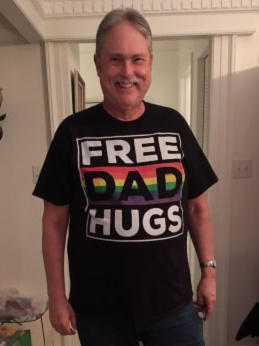 In the midst of Pride month, I saw a post online from my friend, David Mercer. He was smiling in his living room with a tee-shirt that said, “Free Dad Hugs.”

David is a retired minister and older than I am. His adult son had just come out to him a few months ago. He and his wife called me from Orlando to ask me a lot of questions. Proper terminology, boundaries, and the basics. David expressed frustration that his last job made it seem less safe for his kid to come out earlier.

One of the suggestions I made to David was to get connected with other parents through organizations like PFLAG. Along the way, he met up with some dad’s who were going to Pride to offer free dad hugs. David was so proud to take part in it. I had a reservation that I kept to myself.

I used to be a minister as well. The church I was a pastor at was LGBTQ+ affirming and accepting. I thought I was a good ally, but as an ally, I often made the story about me and not the queer person in front of me. I felt that things like Free Mom Hugs and Free Dad Hugs were another way we took their story to make it our story.

After the Pride Parade, I asked David about the response. He said, “I got to give several hugs. It was a newly formed atheist association. I don’t remember tears but many warm smiles. There are people far away from me who are LGBTQ that I wish I was hugging and I thought of them while I hugged those in front of me.”

Dinner With My College Kid

My child is home from college this summer. We were on our way to a local diner for a quick bite to eat last week. I told Dave about my friend and his Free Dad Hugs at Orlando Pride. I expressed my concerns. What I secretly wanted was confirmation bias that I was right. I was about to learn that I have more to learn.

“Dad, at the next Pride event I go to, if I see one of those women wearing the free mom hug shirts, I will hug her and probably cry. It matters. I love that I have you in my life and that you support me, but mom doesn’t, and it hurts so much. If a mom wants to hug me, I need that hug. I need that connection that I might never get with her. So yeah, there is a lot of grandstanding stuff you guys (cisgender hetero allies) do, but the hugs are needed and welcome. And if someone in the crowd feels like you do, they can watch me hug a mom and deal with it.”

Next June I’ll be sporting a shirt offering free dad hugs. It will be done with humility and as genuinely as it was at the dinner party with my new friend. There will be no selfies from me, just hugs.  In a world where I attend protests, write elected representatives, and walk “new” parents down the path of love, I forget too often how many parents reject their queer kids. My child is my life, and I could not imagine doing that.

I will never be able to know what it is like to be my child. I will never know what it feels like to gay, lesbian, bi or transgender. There is something I do know. I know what it was like to have a strained relationship with my father. I remember having to jump through hoops to gain his affection and no matter what I did it did not seem to be enough. Even in my 30’s, I sought a surrogate to fill that role and I lamented the lack of his affection until his dying day.

The lesson? I seem to have been wrong about mom hugs and dad hugs. There is a need and a role.

Breaking the fourth wall a little more than normal, I wanted to introduce myself. When the editor of Queer Voices asked me to contribute material here, I was honored and intimidated. I am a middle-aged, cisgender, hetero white dad of a queer teenager. What could I possibly have to contribute? I can offer hugs, unconditional love, perspective, and stories.

It is my genuine hope that that is enough.

About the Author: Pat Green

Pat Green used to be a minister, but he got better. He left around the time his child came out as transgender. For the last 6 years, they have been on a wild ride together in a wonderful new world. Today, as a photographer/photojournalist, columnist, and a storyteller, Pat is trying to navigate his way through this new existence. His professional writing has been seen in various publications both online and in print for the last 15 years. He was a regular contributor to 22nd Century Media, Aquarius News, Chicago Unheard and Patheos. Pat also wrote a book in 2015 titled, “Night Moves: An Ex Preachers Journey to Hell in a Taxi“, which is available online on Amazon. His professional photography has been featured in various newspapers, websites, and the Chicagoland area art scene. When not working, Pat can oft be seen lip-synching to 80's music, doing street photography, or coloring in his bedroom under a blanket fort.