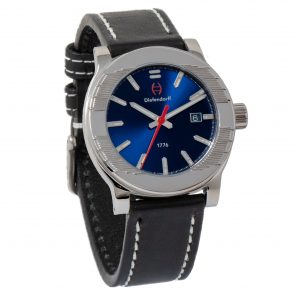 I recently had the opportunity to check out James Reeves’ new collection of Diefendorff Watches, the Cornelius Collection. We sat together at a bakery cafe near Columbus Center (apt) and talked about his company.

His mission is “Rebel Against the Usual” which apparently is both for the design and the business and informs their stated values: 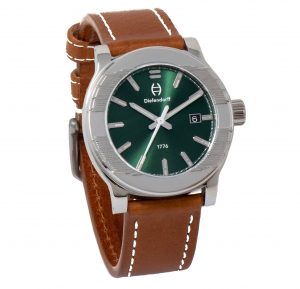 James Reeves, the sixth great-grandson of Captain Henry Diefendorff, is honoring the Captain’s legacy by incorporating his values and independent spirit with this endeavor. James was born 200 years to the day of Henry’s death in the Revolutionary War and feels a connection to his forefather that led him to incorporate his ethos and his story to Diefendorff Watches.

Reeves wanted to offer the best possible product, backed by centuries of expertise, in an American way. Using a Swiss-made movement gives James and his customers peace of mind for the quality of the timepiece itself and honoring Captain Henry’s heritage, as he was the son of Swiss immigrants.

The straps made from American leather are handmade in Florida. While the design of the watch itself, a product of James’ mind, is patented and shares the history of Captain Diefendorff in its own, modern way. The final product itself is assembled and lovingly packaged in the US. 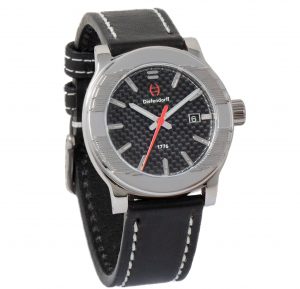 The bezels are ornamented with 17 big lines and 76 small lines (or so we’re told, I didn’t actually count them) call to mind the year 1776 and all that meant for what would become the United States.

Diefendorff Watches continues to honor the legacy it carries by donating ten percent of all profits to charities that support American progress and the global environment.

Diefendorff Watches have all of the features you’d expect in a timepiece that you will wear for decades to come. These are definitely meant to be gifts which commemorate special occasions. We can easily agree with James Reeves’ words, that they are “distinctive yet familiar.”