beetlejuice reinvigorates the 1988 (cult) classic into a frenzied, modern take

beetlejuice reinvigorates the 1988 (cult) classic into a frenzied, modern take

The amount of energy that Alex Brightman (as Beetlejuice) brings to the show has us wondering (not really, though, no need to do a UA) if he’s actually coke-fueled as opposed to simply joking about it. His energy is infectious and his wit carries through—making Beetlejuice an insanely entertaining evening. 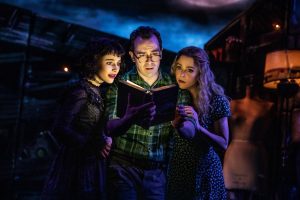 Based on the classic 1988 film, the adaptation for the stage by Eddie Perfect, Scott Brown, and Anthony King with some fantastic design help, Beetlejuice satiates film fans and brings enough innovation to make it an interesting show. 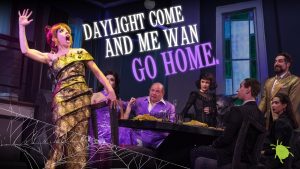 David Korin’s set, notably the house, becomes a character unto itself. Transitioning from the hipster-worthy haunt to a demonic playground, it lends much to Beetlejuice.

The show has been panned by some, looking at you Brantley and Johnny, who expected it to be either truer to the film (then why would it be recreated?!?) or kid-friendly, taking offense to an “F-bomb” or Beetlejuice snorting coke. The show isn’t a Disney musical, it’s not for kids but for kids-at-heart. We’d recommend them seeing the show after dealing with their constipation.