aska: no need to ask, traveling into brooklyn is worth it

aska: no need to ask, traveling into brooklyn is worth it

Aska is Swedish for ‘ashes’ and like a phoenix arising therefrom, Aska offers its own mythical fare. Chef Fredrik Berselius, formerly of Stockholm, has spent the majority of his career in NYC restaurants while “bringing his love for nature to his urban surroundings through food.” 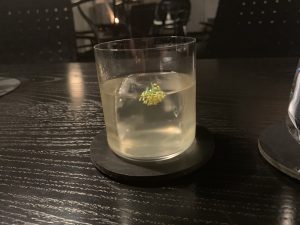 pre-dinner cocktails are available at the downstairs bar

Like that phoenix, this isn’t Aska’s first life. Outgrowing his first space which had earned him his first Michelin star, Berselius reopened here in the Summer of 2016 after a two-year search for the perfect venue (and getting it to meet his exacting standards). Quickly, acclaim followed and he snagged his second Michelin-star. Making Aska one of ten two-Michelin-star restaurants in the city.

Chef’s menu is heavily influenced by his native Scandinavia and emphasizes northeastern US regional ingredients—even if that means flying in scallops from Boston’s harbor for that evening.

Aska is quite intimate with just ten tables in a reservations-required dining room (best to get those on their books relatively early) and the aesthetic honors the food. From the open kitchen (which doesn’t negatively impact the hushed-but-welcoming atmosphere to the nearly all black everything (walls, tablecloths, etc, etc) that brings your focus to the artistic nature of each course.

I recently had the great pleasure of dining in Aska. Under chef’s careful gaze, his brigade sent out an amazing succession of courses that will remain etched in my memory for much time to come—easily it is in the top five dining experiences I’ve had. 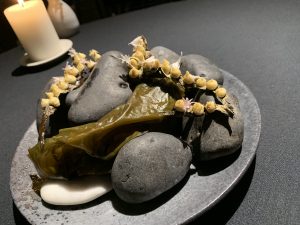 Carefully paired with a selection of wines, we enjoyed:

Bladderwrack with a blue mussel emulsion. Fortunately, the meal started out with chilled and citrus-infused hand towels as this delicious concoction was meant to be experienced not only through sight, smell, and taste, but by touch as well. Delicious and adventurous, this set the tone of the meal to follow. 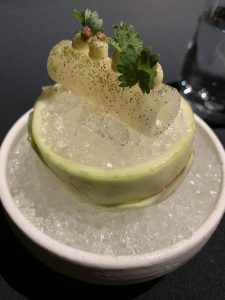 Next up was kohlrabi compressed with linden leaf oil and linden flower vinegar.

On a stormy, sweltering summer’s night in New York City after trekking from Manhattan to Brooklyn, chef’s menu started out suitably refreshing. This course was incredibly flavorful and the play of temperature and texture was inspired. 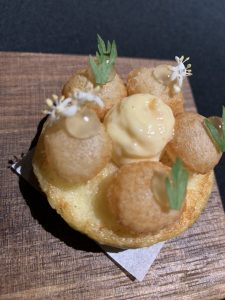 Next up was a Potato Pancake, though that term does no justice to the dish that was anchored with a pommels soufflé and enhanced beyond reason with vendace roe smoked in dried carrot tops and elderflower.

I know this wish won’t be granted, but I so wish that this would be the standard canapé at any cocktail party in my future. This and some Vueve Clicquot are all I need in my life.. Well, excepting my dog and chocolate and the interwebs. You know what I mean, though. 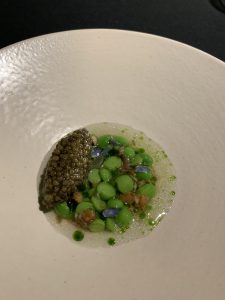 Following that almost life changing course, came Caviar—Imperial Oscietra caviar was complemented by exceedingly fresh peas, preserved mushrooms and green gooseberry in a broth made from the husk of the peas.

You can’t go wrong with any of these components, but though the caviar was certainly more luxe… the standout were the incredibly fresh peas. They were absolutely exploding with flavor. 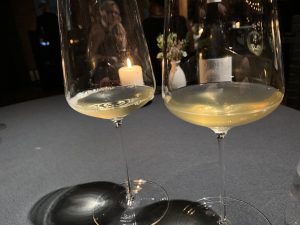 Luxurious decadence is the phrase that pops in mind first for the subsequent course. Entitled Onion, this course is deceptively titled. Grilled onion and scallop is served with a roasted onion broth and a black currant leaf.

The broth tasted like the richest French onion soup I’ve never encountered—surpassing all attempts any chef has ever made for that soup. The broth pairs exceptionally well with the most perfectly cooked scallop you could hope to enjoy. Flown in earlier that day from Boston, that scallop clearly hadn’t even heard of a freezer. More please!

After this course, they brought out the Manitoba bread. Freshly baked in-house with oats and beer, this bread was served warm enough you had a welcome little puff of steam escape when you cracked open the roll. It was served with cultured butter with black locust flowers and with whipped pork fat with dried yarrow flowers. The butter was so luscious and rich while the whipped pork fat was enticingly savory—almost reminiscent of a pork rind, but in the best possible way. 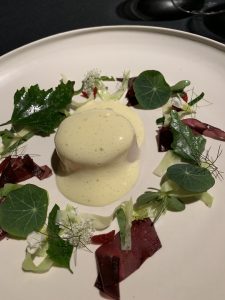 When we were ready for more, out came the hake. The poached hake is served with a salad of cabbages and seaweed, beach plums, and bronze fennel. It’s under an ubër delicious emulsified, buttery sauce. The hake itself had a perfect, tender texture with a light, fresh flavor.

If I weren’t able to have it as a tasting menu, a slightly larger version of this for an entrée paired with the broth (and maybe the scallop too!) from the earlier dish would be a fabulous meal in themselves.

It was a perfect ending for the savory portion of the meal before the courses of desserts to follow. 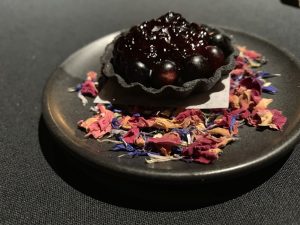 First up was a scrumptious Black Currant tart.  It was filled with preserved with black currants and fresh, silky-smooth cheese.

The tart shell itself was warm and had a great, flaky texture. It was topped with a bit of creamy cheese and then smothered in delicious and not too sweet black currant preserves. 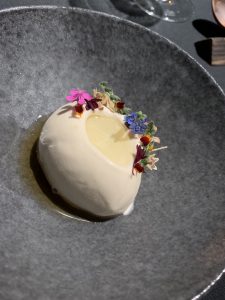 Next was Hay. This ice cream made from toasted hay with summer flowers and a fermented honey sauce along a bedstraw cordial made me wish two things: 1) that I wasn’t lactose-intolerant and could enjoy more than a taste of ice cream and 2) that all ice cream had such nuanced flavor.

Chef Fredrik knows his stuff—from the full gamut of savory through the sweet. Did he stop with hay? Definitely not! 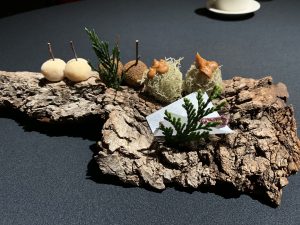 The final treat of the evening were mignardises. Served in a way that made me feel like the witch from Hansel and Gretel was really a gourmet chocolatier and had been kidnapped and imprisoned in the back of Aska by chef.

With tantalizing confections such as blood and rosehip, white chocolate, chewy beet, and crispy lichen and gold there could be no regrets, right? 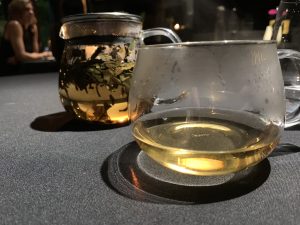 beautiful but a bad beverage for a NYC heatwave

Well, the only regret I had was ordering a hot tea to finish the evening. Though it was a perfect blend of flavors and served impeccably—the hot tea and the weather didn’t pair well. I should have let chef’s team pick the closing beverage. With luck, Chef Fredrik will forgive my carelessness in ordering it.

Make your reservations in advance and lose yourself in Aska’s magic. You won’t regret it—I definitely didn’t.

About the Author: Beau Cooper

Beau Cooper is a dog dad residing in the UWS of NYC. You're likely to find him knee deep in Playbills and caffeine.