5 Tips, from Two Guys & A Tortoise, When Planning A Holiday As A Homo!

5 Tips, from Two Guys & A Tortoise, When Planning A Holiday As A Homo!

When we were asked to guest write an article, we were hugely honoured.  It’s not very often someone reaches out to you and voluntarily asks you to waffle on their website. But alas, here we are, waffling away!  But what it also meant was trying to waffle about something deep, or thought-provoking – or that changes the world.  Instead, we wrote all that off and opted for things to think about as a pair of gays wandering the world; real deep.

So anyway, here’s our top 5 tips for traveling the world – with or without a tortoise!  To be fair, some of these aren’t really tips, so much as things to be aware of that could happen to you…

Birds of a feather, fly together…In the back row.

So has anyone noticed how ever since the Dreamliner came out and we were all lulled into this false sense of awe because of its huge dimmable windows and reduced jet lag, that we are all a little more crammed together than we used to be?  Yeah, well thank Boeing for that! Ever since these ‘streamlined seats’ were introduced, which now seem to have been rolled out across every aircraft, we’ve lost that precious seating configuration of twos along the windows and now we’re all subjected to the disapproving glances of the sweet, tiny, adorable, but homophobic geriatric on the aisle seat beside us.

Craving a bit of judgement-free personal space with your loved one? Look no further; when you’re booking a long haul flight online, what many forget is that the plane gets narrower at the back and what does that mean? Well they can’t cram ten of us in row anymore, and there it is: the return of the two seat configuration! The best part is because they’re at the back of the aircraft, most airlines tend not to charge them as a premium seat. You need to nab them quick though as they’ll go fast!

Which bed do you want?

Kind of tied in with that last point is the bed situation.  It’s hit and miss really what you’re going to walk in to.  Sometimes you’ll check into your hotel and meander your way to your room to find the biggest bed you’ve ever seen in your life.  Like, it’s so big you have to shout to each other to be able to hear what you’re each saying.  Bring binoculars just in case you need to check whether your other half is in the bed with you.

But with every giant, post code defying bed comes the twin bed situation.  Now, unfortunately, this tends to be the case more often than not when two guys book a hotel room.  You know, when you open the hotel room door and you see either two single beds (because a grown adult would ever want to sleep in a single bed), or two single beds bizarrely pushed together, but made up as two single beds.  I’ll pause for a moment for you to try and work that one out.  But yes, you’re right – two individually made single beds…pushed together.

So, much like the last tip, be clear with the hotel.  Just give them a quick ring to check the details of your booking, and just tag in, “Oh, by the way, could we totes have one double bed because single beds are the work of the Devil. Thanks.” 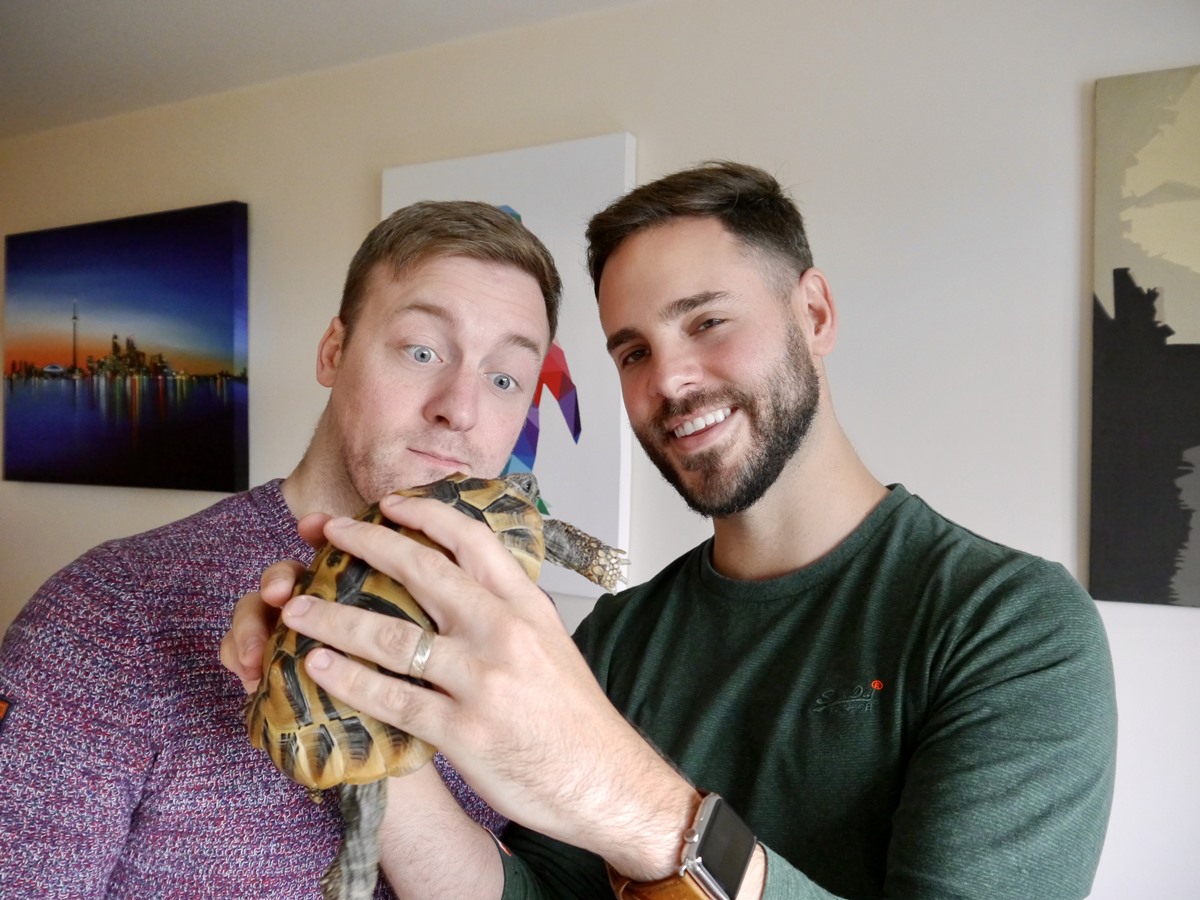 Do it for Bailey!

Going on an extended vacation? Don’t want to leave your pets at home? Do your homework first! We travel all the time back and forth between Jeremy’s family’s home in Canada and our home in the UK and we’ve lost track of the number of times we’ve had to explain to Jeremy’s mum that we just can’t bring our little tortoise Bailey with us to Canada, as much as she wants us to.

Sure, we could bring Bailey over to Canada no problem; she’d breeze through the immigration queue with ease, long black weave, sunglasses and heels (think the Kardashians meets Miranda Priestly from The Devil Wears Prada). But we don’t feel like leaving her in quarantine for 6 months with Border Control, waiting to get her back. How would she survive with out her regular mani-pedis? And she’d starve before touching something that wasn’t organic – talk about inhumane. So moral of the story here: sometimes its just better to leave your pet with that reliable family member. Like what we do with Nellie, our cat- or as Andy’s aunt now calls her since we last left Nellie with her – ‘Little Lucifer’.

Don’t die; that would be a real bummer!

Okay, so it’s getting safer and safer, for the most part, for us to get out there and explore the big wide world unapologetically and in love. LGBT travel is a HUGE market and so many countries are tapping into this now. But we all know there’s a handful of specific countries out there that are just like a, yeah, that’s a no go destination!

When we were planning our honeymoon, there was a certain said country that we had to stop over within during our travel to Phuket and let’s just say there are some dodgy laws if you step outside THAT airport. Well you should have seen the look of relief on our travel agent’s face when we told her we ourselves had no intention of lengthening our short stop-over in order to explore this city. She turned to us and said, ‘Thank God you said that; I spent the last hour before you arrived thinking, how do I advise a couple planing to visit this location that they shouldn’t show affection on their honeymoon?’ Luckily for her, Thailand is one of the most LGBT+ friendly Asian countries so we made the rest of her job easy… Maybe too easy?

In a world where more and more countries are starting to realise that we exist, and should probably have the right to marry each other, you’re starting to also see more and more gay honeymoons.  Ours was to Phuket, Thailand.  As it was our honeymoon, we forked out the big bucks to fly in business class (on an A380 don’t you know), and stayed in swanky 5 star hotels – as well as a tropical floating camp in the jungle.

Our honeymoon was awesome. Pure luxury for two weeks.  And because the company we booked with (Kuoni – who are pretty darn awesome) told everyone it was our honeymoon, we got a bunch of extras.  Things like personalised cakes – which are apparently pretty common thing to do for Thai hotels; however, the personalisation of the cakes at each hotel was “Mr & Mrs McNair-West”.  It looks like no amount of money can buy.

Now neither of us are easily offended in the slightest; we have a really dry sense of humour, so found this constant reference to a mythological bride pretty funny. We searched in all the cupboards, under all the beds, but she was no-where to be found!  But our tip here would be that if you are bothered by that sort of thing, you might want to get your travel agents (if you used one) to be quite clear with the hotels.  Otherwise, play ‘Find the Bride’ – it’s hours of good fun!

About the Author: Jeremy & Andy McNair-West

We are two guys (Andy and Jeremy to be precise) and a tortoise (Bailey)! I feel we made writing this section more difficult for ourselves by being so descriptive in our name - "two guys and a tortoise" kind of gives the game away.